Coral reefs were, and still are, rapidly degrading under the pressure of increasing human activities, and at a faster pace than actions to prevent further the degradation. Comprehensive and fully comparable information about the state of coral reefs was, and still is, urgently needed to provide timely advice to management authorities. Under these premises, rapid and standardised survey technologies at a global scale are needed to provide such information and complement current regional efforts. The XL Catlin Seaview Survey combined existing technologies to merge efforts for a high quality and standardised approach.

The XL Catlin Seaview Survey approach was centred on high-definition imagery, to document and study coral reefs worldwide. Based on the concept that 'a picture is worth a thousand words,' the scientific survey looked at extracting valuable information from coral reef imagery while archiving an unbiased proof of the condition of surveyed reefs. This approach involved rapid acquisition of high-resolution imagery over large extensions of reefs. Using computer vision and machine learning technologies, the imagery was rapidly analysed for coral reef structure across multiple spatial scales, from metres to kilometres.

The XL Catlin Seaview SVII camera system was specially built for this project. It was designed to be a highly robust underwater vehicle capable of taking 360° high-resolution images in almost all-weather conditions whilst on lengthy remote expeditions. A timer triggers the camera allowing it to take pictures at three-second intervals, which is controlled by an Android tablet, encased in an underwater housing. The head of the camera system is designed to remain sealed whilst on expedition to avoid flooding issues – data and power are transferred through a wet link docking station.

Using diver-propelled vehicles and customised HD cameras (SVII), divers surveyed unprecedented areas of coral reef over multiple reef sites. A depth sensor logger carried by the diver monitored the survey depth every second. Surveys were set to a standard depth of 10 metres (+/- 2 metres) following the contour of the reef at this depth. By standardising the survey depth, we avoided the inclusion of confounding factors (i.e., light, wave energy) when comparing the structure of coral reef communities amongst multiple spatial scales.

During the survey, the SVII camera captured three high-definition images every three seconds during the fifty-minute dive. These images allowed us to continuously record the full 360° environment along a 2-kilometres stretch of reef.

The transect location was selected by looking at capturing a vast variety of coral reef configurations or habitats to best represent the fore-reefs of a region.

Every image captured for the AXA XL Global Reef Record has a geographical tag that allows us to accurately describe a specific section of reef that can be revisited in time and compared against previously available information. To achieve this, a GPS unit was synchronised in time to the SVII cameras and tethered from the surface by the divers.

In order to accurately and consistently locate the benthic community structure, image scale was required to standardise the area of the reef to be analysed. A customised altitude logger was fitted to the SVII camera, which also synchronised to the time of the SVII cameras. This altimeter, connected to a doppler transducer, logged the altitude of the camera with respect to the seabed and depth. Using this information and the optical properties of the lens of the SVII camera, the footprint area of each downward facing camera was estimated.

Thus, the Global Reef Record provides two main image data-products. The first product is qualitative 360° panoramas of the reef. The panoramas are created by scaling and stitching the fish-eye imagery and provide an interactive way to explore the complete environment of a reef. The second product is a quantitative analysis of benthic categories (% covers) along the reef transects. To generate these covers, from each downward facing image we obtained quadrats with features required for image analysis (colour corrected and cropped quadrats of ~1x 1 m). The image quadrats were re-scaled to fixed pixel / cm ratio and then automatically annotated as detailed next. 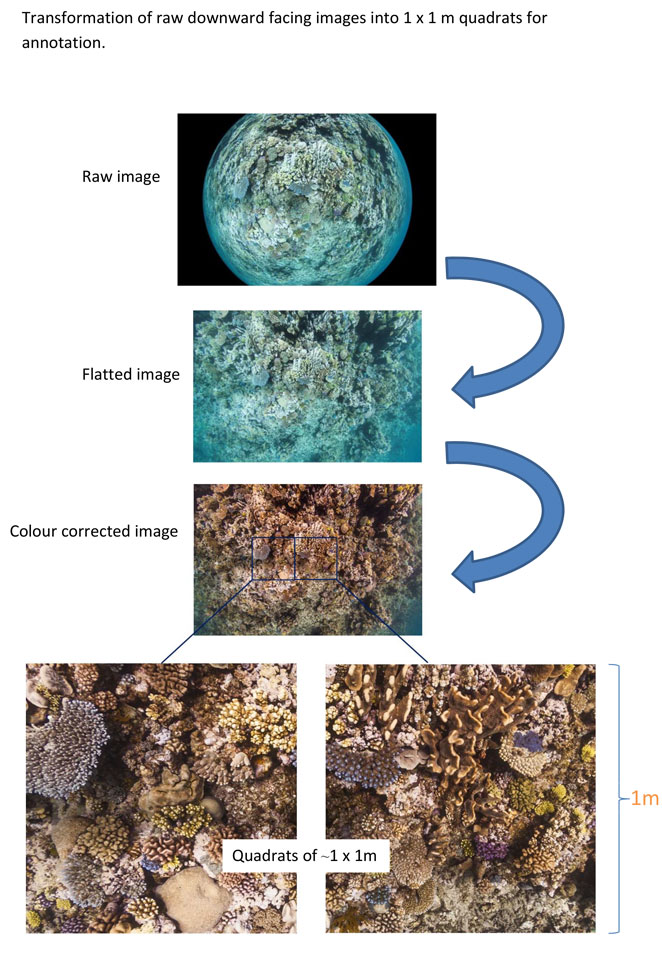 Every field campaign provided about 30-40 thousand survey images which need to be annotated in order to extract benthic cover estimates (e.g., % cover of coral, algae, & sand). Unfortunately, manual annotation of a human expert requires at least 10 minutes per quadrat, which creates a huge bottleneck between collected images and the required data-product (i.e., 30,000 images would take 3 years to annotate). To address this, we developed state-of-the art automated image annotation methods based on deep neural networks.

A random subset of the obtained quadrats for each region was first manually annotated using the random point annotation tool of CoralNet (coralnet.ucsd.edu). This data was then used to train deep neural networks that map image patches to key benthic categories. Label sets of benthic categories have been established based on their functional relevance to coral reef ecosystems and their ability to be reliably identified from images by human annotators. The labels were grouped into main benthic functional components depending on the coral region.
Names and descriptions of labels can be seen here.

To validate our method, we generated automated cover estimates on several randomly selected reef segments (roughly 40 consecutive survey images) and compared against estimates by human experts. After verifying that the estimated covers were highly correlated with those by human experts, we deployed the network on the whole set of collected imagery. Automated image annotation using this method was very fast; on average it only required 0.2 seconds, three orders of magnitude faster than manual analysis. Analysis of hundreds of thousands of images from a reef region could therefore be achieved in a manner of days. For example; over 190,000 survey quadrats from the GBR were automatically annotated in one week using a single computational unit (a NVIDIA Titan X GPU).

Further methodological details can be found at:

The data stemming from the XL Catlin Seaview Survey and associated AXA XL Global Reef Record has contributed to an ever-growing number of scientific outputs. As at end December 2021, these outputs include 50 scientific papers and reports, 33 conference abstracts and research presentations, eight scientific articles and one book. Details and links for each of these can be found here.